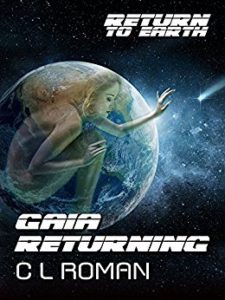 Today, I have the pleasure of posting an interview by an amazing author–C.L. Roman. With the release of her short story “Gaia Returning,” which is part of the Return to Earth collection by the Alvarium Experiment, C.L. is venturing out into the sci-fi genre and is sure to gain new fans with her lyrical writing and insight into the human condition.

Her story is free for a couple of more days, so go download it and enjoy. Also, please check the end of the interview for further information about all of the authors involved in the Return to Earth collection.

Welcome, Cheri. How did you become involved with the Alvarium Experiment and what was the thought process behind evolving ‘Return To Earth’ as AE’s second project?

CLR: Like so many other things, it came about through networking. Bria Burton and I are both members of the FWA. We had done some manuscript trading and become familiar with each other’s writing through beta reads. I’m not certain who came up with the new premise, but I was honored when Bria invited me to participate in the second project. Then too, the premise was too intriguing to turn down, so, here we are.

Q: What was your inspiration for this particular story?

CLR: It’s funny how a group of things can come together to produce something altogether different from one’s first intention. In this case, I was struggling with my original concept, trying to focus it tightly while a number of ideas kept fluttering around in my head.

And then, I came home one day to find an empty plastic container on the counter with a note: Recycle!! Apparently my daughter had found it in the regular trash and the event had clearly frustrated her green, earth-loving heart.

Right around that same time I saw a documentary about the really serious issues we have with regards to the Earth and our use (dare I say abuse) of her natural resources. The film nearly broke my heart. And I thought, wow, wouldn’t we be in trouble if Earth were a sentient being? How long would she put up with this mess and what would she do about it?

All these things swirled together, in and around those original ideas, until it sort of distilled into Gaia Returning.

Q: Could you share with us either your process or a difficulty you overcame as you wrote Gaia Returning?

CLR: My original notion, and that’s all it was, at first — a notion, was very close to being nothing more than the original prompt.

But there were too many threads, too many characters and ideas, all fighting with one another. My writing partners kept looking at my pages and saying, “This is a novel.” And what I really needed for the Alvarium Project was a short story.  A novella at most.  But the truth was, the story that was demanding to be told was bigger than that, bigger even than a stand-alone novel.

So when my daughter made her request, it triggered something in my head, and what I ended up with was an outline for a four novel series. It wasn’t until I got that outline down and could see where Gaia Returning would fit within it that I was able to write the novelette that eventually resulted.

Q: What does the next year for you as a writer look like?

CLR: Right now I’m working on the third book in my YA series. I really want to finish that before I go on to anything else, but the Gaia series is poking at me, demanding to be written. And then, of course, people have been asking what’s happening in the world of the Rephaim, the fantasy series I’ve been developing. So there’s always something to be done.

In an ideal world, I guess I’d finish Ghost Candidate, then do the next one in the Rephaim series, whatever that is, and then start on the Gaia series.  But then, we don’t live in an ideal world, so anything is possible.

Q: Where can readers find out more about you and your work?

You can find me on Facebook at or on Twitter @cheri_roman. Or you can visit my blog and sign up for my newsletter for the latest on my new releases, plus some exclusive content! I look forward to seeing you there.

Author Bio:  C.L. Roman writes fantasy and paranormal young adult. She currently has three series in the works: Rephaim, The Witch of Forsythe High, and The Freestar Chronicles. Most days you can find her on her blog, The Brass Rag, or working on her next novel or short story. Cheri lives in the not-so-wilds of Northeast Florida with her husband and Jack E. Boy, the super Chihuahua.

About Return to Earth

Return to Earth is the second project of the Alvarium Experiment, a consortium of accomplished and award-winning authors.

The stories do not need to be read in any particular order; each story is an entry point into the overall story.

Return to Earth stories & authors are:

Aona, an Alien-Operated Bot (AOB), suffers a malfunction that could jeopardize her mission on Earth and could lead to the extinction of an entire species from another planet.

“The Paradoxical Man” by Bard Constantine.

Albert Rosen is one of five explorers who vanished on a deep-sea expedition into the Bermuda Triangle. He returns to Earth centuries later, transported across space and time through a mysterious wormhole. However, Earth is not the home he remembers. Humankind has been evacuated, and the survivors lie in hibernation aboard the Locus, an orbiting space station. Rosen is forced to match wits with Deis, an artificial intelligence determined to keep humanity in stasis until he is convinced they are fit to return.

“Children Of The Stars” by Charles A. Cornell.

In Japan, an American medical researcher discovers the deadly secret behind an eighty-year-old woman’s ageless appearance and incredible fertility, and her connection to the bizarre disappearance of the freighter the Ourang Medan in 1948.

A once thought failed secret mission to colonize a distant planet, named 0X3B1, is discovered to have been successful when descendants of that mission return to Earth fifty-one years after their grandparents left, much to the surprise, and fear, of the world.

When a virus threatens the lives of everyone on board a transfer station for intergalactic travel, it’s up to Dr. Candace Bertram to retrieve the only known vaccine from Earth. The risky, untested method of transport could mean catastrophic mission failure, and grave danger for Dr. Bertram.

Finally achieving his dream of being an astronaut on the Jupiter missions, Jasper’s mind is elsewhere, on the recent loss of his stepfather, Bud. But Jasper’s space mission is interrupted when he is sucked into a wormhole that transports him to a different time, 30 years in the past. And now, doctors don’t believe where he’s from. Fortunately, his loving nurse at his side comforts him and a love builds. That is, until he realizes that his nurse’s son is Jasper as a young boy.

Alien invaders are lobbing fireballs at Peoria, but Grandmama is holding tea. When the military arrives in search of Mrs. Suniol, Alice is drawn into the mystery of Lake Snow, a missing husband, and securing the key to an entire civilization’s survival.

“Under The Whelming Tide” by Ken Pelham.

The Aethir, space-born descendants of the mythical planet Earth, are returning home at last to fulfill their destiny. But not all believe the great homecoming will be the heaven they have been promised.

For the past two years Dr. Olivia Tate had led a satisfying life with her alien spouse, Kya Dumont. As a scientist and cancer survivor, Liv is on a mission to discover a cure for the deadly disease. But something equally deadly has put Kya’s people, the Oo’mahn, in danger of extinction. With an order to evacuate Earth, Kya struggles between helping her people and remaining with the woman she loves, especially now that Liv has also fallen ill. Now Kya’s ship is approaching and the couple must not only find a cure for Liv and the Oo’mahn, but also devise a plan to remain together despite the objection of the aliens.

Pirates steal things. It’s what they do… When Captain Irina Demyanov’s first mate disobeys orders and steals the crown jewels of a vengeful alien race, she knows she’s out of options. Desperate to escape, Irina takes her chances on a dangerous vortex leap and lands near an unnamed, yet strangely familiar planet. The gamble may have paid off, but between hostile inhabitants and inevitable discovery by their pursuers, the pirates’ chances of survival appear slim. Can the human remnant find refuge, or will their enemies put a permanent end to the human race?

For additional info about the stories and authors, visit the website: www.alvariumexperiment.wixsite.com/returntoearth