The second featured author on my site during the Indie Lights Book Parade is Cheri Roman. She was kind enough to give us an interview and some background information on her Rephaim Series.

-Angels are such a hot topic right now but it’s rare to have a story written about angelic angels as most show them from the fallen standpoint. How did you come to the decision to keep them “pure”?

It’s really interesting that you should ask that, because I don’t see them as pure. Or maybe we’re looking at different definitions of the word. My angels leave heaven in order to avoid fighting the fallen, whom they consider to be their siblings. In doing so, they know that they are turning their backs on the being they consider to be their father. This is an incredibly difficult choice and provides a major source of conflict for all seven of them. I think our choices are more interesting when they are hard, and especially so when we aren’t completely satisfied with them once they are made, even when we don’t feel we could have done anything else. Having characters who were trying desperately to do the right thing, and maybe failing, allowed me to present individuals who were, perhaps more relateable and unique than the typical “bad boy” so often presented in modern literature.

-What about their human partners? Is there anything that makes those relationships unusual?

Apart from being two or three feet taller than the average human, you mean? (smiles) Well, of course there are things that the Nephilim have to deal with that “normal” humans don’t. For starters, their spouses don’t understand the concept of forgiveness – a fact that produces a major conflict in Sacrifice. But there are advantages too. Nephilim are stronger, faster healing and longer lived than normal humans too. But I think relationships and the problems that go with the are fairly universal. That’s one of the things that makes the relationships so interesting. Everyone can relate on some level.

-Your cover is beautiful! I know it’s not always in the author’s control as to what ends up being their cover. What has been your favorite book cover from any author?

I really have a hard time with the notion of favorites! 😀 There are so many beautiful covers out there, and new ones coming out every day, that it’s hard to choose. I’ve always loved the Alan Lee covers done for the Lord of the Rings series because of the ephemeral quality of the work and the depth of connection the art has with the novels. That honest connection with the book is the most important quality of a good cover, I think, and the best covers convey the soul of the novel.

-Authors all have their own schedules and quirks when writing a novel. Some like a certain room in the house, others a certain time of the day. Do you find yourself writing better under certain circumstances?

Well, I’ve considered building a habitation on a desert island, but my husband wasn’t too keen on the idea. It really depends on what I’m writing. For non-fiction I need low distraction, but for fiction – no distractions. I work best in a quiet room, door closed. I can’t even have music on that has vocals I can understand. So I listen to Latin music, because I can’t understand the words well enough to want to sing along. Luckily, I’m blessed with a wonderful husband who created an office for me in our house. Close the door, close out the world…sort of.

-If you could live in the world you’ve created would you? Why or why not?

Heavens no, there are no curling irons! 😉 Seriously though, the world I created doesn’t exist by the end of the book, so…oops I think I’ve answered your last question.

-If you were able to co-write with any author, living or dead, who would you chose and why?

I love Jules Verne, for his imagination and sense of humor and Suzanne Collins for her sheer depth of characterization. But I don’t know that I’d be very good at co-writing fiction. I get too proprietorial over my characters. But if Mr. Verne wanted to do a cookbook, I would love to do that!

Well, Sacrifice is the second book in the series and one of the biggest questions at the end of Descent was, “what happened to everyone,” because that story only explains the fate of two individuals, Fomor and Danae. Sacrifice follows Volot and Shahara, but we do get a hint at the beginning that the others are alive and well, continuing stories of their own. 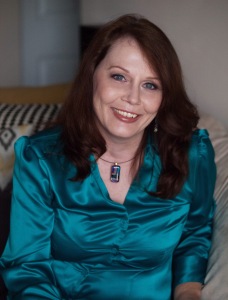 Author Bio: Cheri Roman is a writer, editor, teacher, wife, mother, grandmother and friend, in whatever order works best in the moment. Most days you can find her on her blog, The Brass Rag, or working on the next novel in her fantasy series, Rephaim. Cheri lives with her husband and Jack, the super Chihuahua.

Other books by C.L. Roman:

Escaping a global catastrophe, angel-human hybrid, Shahara, lands safely in Babylon with her beloved Volot, an angel with a sacred mission. But the victory is a hollow one, for the world she knew has been obliterated. Battered by the loss of her family and the denial of her most cherished dreams, Shahara’s new life begins to disintegrate as she is lured by promises of power and fulfillment into the violent, blood-soaked ambitions of a ruthless enemy. With her marriage shattered and countless lives hanging in the balance, Shahara must make a devastating choice. Can she survive her decision, or will victory require the ultimate sacrifice? By turns romantic, suspenseful and terrifying, this epic fantasy treads the knife edge of human frailty and superhuman courage.

Rafflecopter Giveaway:
Thanks to our wonderful parade authors we’ve got fantastic swag baskets for three awesome winners! Prizes include ebooks, gift cards and fun! Remember, winning is as easy as visiting the ILBP blogs and clicking the Rafflecopter link–easy to enter; easy to win!